The generations of our grandmothers and mothers, embedded in modernism, thought, and was even certain, that providing education and contribution to the job market (along with production and individual financial independence) were sufficient basis upon which women could fulfil their complete humanity. In a way, this concept – notwithstanding the importance of education and work – proved reductive, as reality proved it insufficient.
2021-12-28

When examining the question of women’s equality, it can be noted that the discussion is, quite automatically, reduced into comparing women with men, their status, and the greater privileges to which they have access, though the vast majority of the latter lives in misery all the same. Likewise, the law is rendered worthless if not backed by common belief and convictions; and the opposite is equally true. Generally, laws and common beliefs correspond with and react to each other; likewise, one curbs or advances the other. This, in particular, highlights the importance of challenging common ideas and values, because even if the law was superior to common beliefs, society could still find ways to eventually circumvent the legal state of affairs.

We therefore inspect this topic through a completely different method, which, we think is the more fitting way. What we intend, and what we sought to capture in these eight articles that hail from all over our region, is what equality means when it comes to women’s completely fulfilled humanity, that is, when they control their own lives. That, is freedom, and along with it come the vital values for which humans fight, topped by dignity. It affects all life’s aspects, which are as broad as life itself. Such values are interconnected and intertwined, sometimes even contradictory, whereby addressing one after the other, or separately, seems quite impossible. We may quickly deduce then that, to confront and critique the compound inequalities from which women suffer is to comprehensively critique the prevalent system. Such critique should thus involve all social, economic, legal, political, sexual, and educational relations. It also implies that the situation shall not be settled without an overthrow of both symbolic and epistemological systems, both of which were clearly devised in a manner that disservices women.

The generations of our grandmothers and mothers, embedded in modernism, thought, and was even certain, that providing education and contribution to the job market (along with production and individual financial independence) were sufficient basis upon which women could fulfil their complete humanity. In a way, this concept – notwithstanding the importance of education and work – proved reductive, as reality proved it insufficient.

Oppression, humiliation, trivialisation, and even murder, sometimes, kept harming women all over the world, and not just in our region. As such, the question of women fulfilling their humanity affects the entire existent system, and certainly lies at the core of its substructure.

What we aspire to do, here, then, is to feel our way through this key question, related to this structure, highlighting it so that it becomes a premise for numerous studies that further monitor, analyse, and research in an aim to provide a detailed picture of that “moment” our region lives today and which, we believe, is a turning point.

Because matters are as they are, we shall merely try to capture and observe the key question as a gateway into the topic, simultaneously touching upon the symbolic and epistemological: the “disparity”, or the gap, between women-related conceptions and laws and their reality, that is, the status and role that women actually play, even if rarely or inadequately acknowledged.

In these articles, we seek to monitor the “beliefs” that concern women in the various countries of our region, be they substantial or insignificant, those that take the shape of common and entrenched convictions (1), as givens, and those that take the shape of circulated rumours, or derisive and disdainful jokes, along with the language and vocabulary employed to describe them. We also note the laws, along with the discriminatory measures against them. We tell all this to illustrate the contrast between all the aforementioned and the actual reality of women, which is indeed progressive: from general life situations, work spaces, production, to the different responsibilities that women take upon themselves, to education, to the modes they adopt to live their own personal and intimate lives, all the way to their relationship with their bodies, and so on.

We say that the actual “reality” of women is bigger than the “myths” about them; it is also bigger than the laws that govern them all across the countries of the region. It would be equally beneficial to draw comparisons between these convictions by location, as well as explore the solid status of women in countries that do not “demonstrate” or parade it (like Yemen, for instance, and certainly many others); it would be just as useful to monitor the strategies to which women resort in order to adapt and manage their lives as best as their resources allow (perhaps to evade the trope that haunts them, “cherchez la femme” or “Certainly mighty is their plot”!), as well as the moments they’re unable to do so, whence enters violence.

Women face up to all responsibilities, whether it comes to contributing to the family’s revenues (though they are often the sole breadwinners in their households), to other different domains, where they make decisions for themselves and their families, to a thousand other initiatives that benefit the common good. However, all this remains “implied”, in the sense that awareness of it exists to a large extent, but is far from being recognised in its manifold sense: as regards convictions, behaviours, language, and, of course, laws and, sometimes measures (which are applied while based in no law, but whose power is real all the same).

This folder continues along the lines of the questions raised by many earlier folders (each of which combines a collection of researched articles exploring one topic, through different prisms or about several countries) that Assafir Al-Arabi published in previous years. The latest was the Feminisation of Precarious Labour (preceded by They Are Dependable, The Cameras and Screens of Palestine’s Women, Their Stories, Women and Religious Fatwas, Women in Politics and Law, The Prostitution of Women is Slavery, and Harassment in all Shapes and Forms, all of which are available on our website and may be accessed under “Folders”). Additionally, there are dozens of other such articles that do not appear as part of the folders or booklets; the latest of which examines the ongoing amendments to “Personal Status” laws and “Family Code” laws in several countries of the region. We publish this booklet in the hopes of producing texts that are rooted in reality, and, thus, avoid unhelpful generalities.

1- Notably, as a “joke”, women are for instance infamous for being bad drivers (and needless to say, macho phantasms about driving cars, are quite universal), and that they’re the reason behind traffic jams, and other such ideas. In reality, however, the percentage of women behind car accidents (especially serious ones) is much smaller than the percentage of male-induced accidents, even if we were to consider the smaller number of women drivers. We could also note other “humorous stories” (that are anything but humorous!) like the term “tomboy”, which has a negative connotation, and “a sister of men”, which is supposed to be a “good thing”, as it implies an ease of socialising with men and being on a par with them, and the difference between those two. Attitudes and phantasms also abound around unmarried women, or those who mother no children. This question, after all, is at the core of the patriarchal configuration, upon which the entire social system and division of labour is based. Naturally, many other examples may be drawn here. 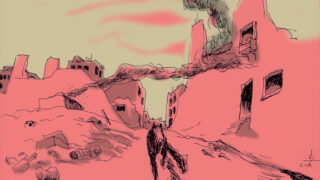 The Slums of Khartoum: On Life’s Edge

An account of Jabarona, one of the slums at the outskirts of Khartoum, inhabited by the second generation of migrants (1980-2000), who fled the wars and armed conflicts in the...

Over the past few decades, the authorities’ performance, fluctuating policies, and contradictory approaches have led to a state of impoverishment in Sudan, creating hotbeds of political, economic, and social unrest...