Here is the introduction to the second thematic folder that Assafir al-Arabi has devoted to studying the 2019 uprisings. Its texts come from Iraq, Sudan, Algeria and Lebanon - where the 2019 uprisings took place. They expose how and why the manifold creativity in which has revealed itself in various fields in the context of these uprisings, can indeed be considered “constitutive”, indicating changes that have and continue to occur.
2021-01-15

“The river that everything drags is known as violent, but nobody calls violent the margins that arrest him.”
_Berthold Brecht

Constitutive of what? The events of the 2019 uprisings in Iraq, Algeria, Sudan and Lebanon revealed that which was latent in those countries and that which went “unseen” for a long time, for  lack of previous opportunity for it to emerge from whence it simmered, and express itself. It was as if these uprisings have condensed time and made every second precious, irreplaceable. This disclosure is foundational; it conveys the changes that occurred and continued to unravel during the uprisings; changes in the sociology of these societies, in the existing relationships, as well as in convictions and desires, that is, inside the minds of people. Changes that would have gone unnoticed and unrecorded had it not been for the creative constituents that accompanied them.

First, there is that overwhelming sense of joy that permeates every gathering of such a massive number of young people in one place. Men and women alike, no distinctions made, gather. Then there is that freedom, to write and paint whatever one wants, come up with new slogans one believes are most expressive of the occasion, with total disregard to anything else, and without submitting to established or “sacred” standards – be they religious or civil. There is also that courage and determination, manifest in the fact that all the uprisings were long-lived and persistent, regardless of the extent of repression they faced. The movements would only be obscured by the exacerbated coronavirus pandemic on the one hand, and the rulers’ withdrawal into a great silence on the other, behind their fenced walls, expressing complete separation from the societies they govern. Their scandalous deeds are embodied precisely in this complete detachment from society, which raises some anxious questions about the viable tools of change and its conditions.

All texts published in this second folder – following the first, titled 2019 Uprisings: Severed Outcomes – point to these characteristic creativities and jointly capture, scrutinize, and interlink them, even when those initiatives come from extremely diverse contexts and positions… which signifies the powerful meanings they hold.

The presumption was that this generation is “non-politicized”, crushed by its futureless prospects. Yet, there were its sons and daughters, on the streets, redefining politics and reinventing their values, quite simply and almost intuitively. There they were, “certain” about what they were doing and about their future, even as death was looming.

They had birthed new tools for the resistance they embodied, while the older generations, used to their own frameworks and methods of organizing, devising programs, harmonizing discourses and making declarations, saw shortfalls in the uprisings that predicted their “failure”... As if everything that preceded those uprisings had been a grand successful accomplishment!

Alongside the immense beauty that unfolded in the streets of Baghdad and other cities in Iraq, Beirut and other cities in Lebanon, Algiers and other peripheral parts of the vast country, Khartoum, the Triangular Capital and all the uprising areas in the vast Sudan, these beautiful texts provide, in a touching yet concise language, a description and a revelation, accompanied with abundant, well-chosen photographs. They offer an invaluable understanding and interesting details to those not present “there”, in that place and time.

One might perhaps like to stop by that cafe in Khartoum, run by a group of young women who offer their visitors programs of the daily seminars of the revolution. One might feel like paying the mothers a visit, who occupied the protest square in Baghdad, cooking and feeding the protestors (a maternal practice par excellence), while watching over everyone, supporting and reassuring them, and taking care of the young women who had broken all boundaries, painted the city walls, and led demonstrations everywhere. One might dream of joining the supporters of Algerian football clubs in singing “La Casa del Mouradia” in unison, with a fiery enthusiasm. Or, one might wish to visit “the other” Lebanon, from border to border, thus transcending the stereotypical image of the country as a big mall and a night club…

All this was done with a lightness and joy that detract none of the seriousness, persistence, or keen awareness that accompany the event itself. A generation has thus been born; one whose children will come to be identified by it and define themselves through it. Their self-definition would be two-fold: First, in every country that had witnessed one of those recent uprisings, and second, across and throughout the region, in a collective sense. This had also been the case with the 2011 uprisings, as it was with the emergence of the Palestinian resistance in the late 1960s…

With every disappointment and every defeat, some voices never fail to cry out that “This is the end!”, “Enough”, and “We are no more.” Yet the spark of revolt returns time and again. Those who were only young women and men then now stand in awe – half sceptical half cautious – of the new attempts they eagerly bear witness to – as similar to what they themselves had tried to achieve as it is different. These are indeed alive societies. 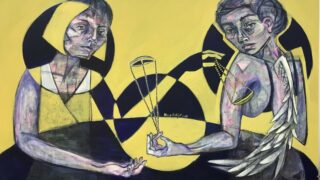 Lebanon: Where is all that freedom and equality?

In the face of deteriorated living conditions and women’s vulnerability, especially in marginalised groups, a few important paradoxes are laid out as a response to the reductionist answers about women’s...