Goats and colonizers are the oldest of foes, linked by an enmity that rages across all of Palestine, especially in the Naqab
2017-01-06 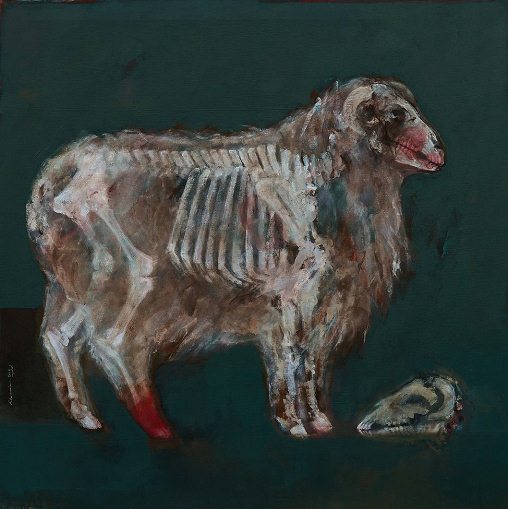 A Zionist blowhard once wrote an article recounting his woes in the Naqab (Negev) desert, describing the arduous path he took in growing Chardonnay grapes to make high-end wine. One day, some goats wandered into his vineyard and started grazing there. The author shooed the goats away but kept one hostage when the two Bedouin shepherd girls who came with them refused to obey his commands. “The desert is ours and we will go in whenever we please,” one of them said.

The herd in question was comprised of black goats, also called Bedouin goats. Goats and colonizers are the oldest of foes, linked by an enmity that rages across all of Palestine, especially in the Naqab. It is a battle over the land: its dimensions, its shape, its uses. The colonizer wedges everything into the land and declares war upon everything on it: insects, plants, trees, animals, all to change the landmarks of Palestine, to reshape its natural habitat and to control its spaces. But nature has reserved the right to reply in the place and time of its choosing.

Treading on the Law

“It is forbidden for any person to own or graze goats except within the boundaries of his own land and in a permissible ratio … of one goat per 40 dunums [4 hectares] of agricultural land.” This provision is the key text of a 1950 law proposed by then-Prime Minister David Ben-Gurion, known for his voracious appetite for Naqab lands. The statute was entitled “Vegetation Protection Law (Damage by Goats),” but in the villages of the Galilee and the Naqab, it became known simply as the “Black Goats Law.”

Armed to the teeth with agricultural expertise, the Zionist legislators who passed this law held that herding goats in wooded and mountainous areas leads to the agricultural phenomenon called overgrazing. When livestock feed intensively in natural pasture land, this accelerates processes of desertification and soil erosion, disturbing ecological balance and biodiversity. Yet beneath the dry text and scientific justifications, this law conceals many racist aspects and colonial goals, namely undermining Palestinian herders at the expense of Zionist agriculture. For Palestinian animal husbandry, herding depends on freedom to move in nature across large expanses, whereas the kibbutzim and moshavim rely on types of livestock that can graze in confined areas. Such Jewish monopolization of agricultural production in Palestine has a long history. To take only one example, Palestinian citizens of Israel are allocated only 0.3% of the country’s quota for producing eggs. In other words, 99.7% of Israel’s egg production is reserved solely for Jewish farmers.

Yet commercial goals here are secondary to Zionism’s true obsession: complete control over the land through constricting Palestinian movement. In the 1950s, Israel developed new ways of controlling territory with reckless abandon: they forcibly concentrated Palestinians in enclosed spaces, both rural and urban, from Haifa to the Naqab. They imposed military rule and required permits for Palestinian movement until 1966. Before that, they passed the Absentees’ Property Law in 1950 permitting the confiscation of homes and lands in all the territories occupied in 1948. In 1960, the Israel Lands Administration (ILA) was established, to manage the lands owned by the state, the Jewish National Fund, and the Development Authority. The latter body was the one to which ownership of refugee lands were transferred. In total, lands owned by the ILA are equal to 22 million dunums, or 93% of the land of Palestine that was occupied in 1948.

“Eighty-eight percent of the Israeli population are not farmers, let the Bedouin be like them. Indeed, this would be a radical move which means that the Bedouin would not live on his land with his herds, but would become an urban person … They would be accustomed to a father who wears trousers, does not carry a traditional dagger, and does not search for head lice in public but would instead go to school with their hair properly combed.” Moshe Dayan wrote this in 1963 while serving as minister of agriculture in Ben-Gurion’s government, as a prelude to talking about “forced urbanization.” The harms inflicted by the Black Goats Law on Palestinians throughout Israel were one part of a policy of forced urbanization that impacted the Naqab Bedouins above all. Of the 90,000 people from 95 tribes living in the land of the Naqab on the eve of the Nakba, only 11,000 from 19 tribes remained by 1952. They were concentrated in an area equivalent to 10% of the lands they previously owned. Since the 1960s, this policy has been followed by attempts to get rid of Bedouin villages of their people and concentrate them instead in seven “townships” planned by Israel.

In 1976, the government formed a special unit called the “Green Patrol” to enforce agricultural laws in “open areas,” such as confiscated lands or nature areas like mountains and plains. The Black Patrol, as the Bedouin preferred to call it, seized many herds of goats and sold them off to be slaughtered in accordance with the Black Goats Law, all because they walked onto so-called “state lands.” These activities escalated in 1980 due to the relocation of Israeli military bases from the Sinai to the Naqab in the wake of the Israeli-Egyptian agreements. In 2011, the writer Daniela Karmi (known for her political work in anti-Zionist organizations) published a novella about confiscations under the Black Goats Law. The story revolves around Zionist men in the Green Patrol as they chase Bedouins, take their herds, rape one of their colleagues, and talk about their dreams for a bright future.

In recent decades, the Green Patrol’s focus has turned to demolishing homes in the unrecognized Bedouin villages. In 1998, the Desert Patrol killed a Palestinian youth during one of its operations. From 2000 to 2005, they shifted their efforts to destroying crops. In 2002 alone, they razed 12,000 dunums (1,200 hectares) of cultivated land. Those years also witnessed the use of planes to spray herbicides on Bedouin crops, including on the farmers themselves and, at least once in 2003, even children playing in the fields.

The Benefits of Overgrazing

As part of the illusion of political pluralism in Israel, some “left” Zionists oppose the Black Goats Law. In the 1980s, Israel started to recruit many Bedouin, who were subject to all manner of persecution and strangulation, into the army. They were employed mostly as trackers: armed with their excellent knowledge of the natural environment, Bedouin soldiers would walk far ahead of the regular brigades in order to ensure the safety of the area and to clear it of guerrillas. One “left” Zionist opposed the Black Goats Law because it prevented Bedouins from grazing their animals, thus depriving them of the very practical experience in “the field” and tracking skills that “must be enshrined in military service.”

As for the portrayal of Bedouin goats as an ecological menace, we can fortunately save ourselves the heartache of dwelling on the absence of Palestinian documentation, for Israel’s own records show, with important agricultural and environmental information, that claims about overgrazing were unfounded. Researchers have noted the importance of grazing in controlling the growth and spread of trees and shrubs, which thwarts the growth and ultimately the existence of herbs and wildflowers, in turn leading to the disappearance of animals and birds that need open spaces to live in. One ecological study carried out on Crete examining the effects of goat grazing in inhabited areas found that places where goats regularly grazed had 46 types of wild herbal plants, whereas others only had 10.

Livestock grazing benefits open areas in nature by reducing the danger of fires breaking out and rapidly spreading through dense underbrush. In nibbling away at shrubbery, goats reduce the quantity of flammable materials, as well as the density of vegetation. Palestinians on the slopes of Mt. Carmel in Haifa remember well the forest fires there, and the oldest among them will recount how their livestock were confiscated and were sold to slaughter in accordance with the Black Goats Law nevertheless. Recall also Israel’s infatuation with planting pine forests, wiping out six million olive trees and hiding the markers of depopulated Palestinian villages in the process. Pine trees by their nature sprout upward and their cones, when exposed to fire, tend to scatter great distances, thus increasing the risk of that forest fires will rapidly spread. Pines also tend to prevent the growth of trees like oaks and laurel that are known for their resistance to fire. The pine is itself incapable of reforming itself after fire. All of these disastrous factors became painfully clear during the fires on Mt. Carmel.

Two groups of Israelis have monopolized agriculture. The first focuses on commercial production and exports to the world (including the Arab states, since we are apparently too busy to grow our own crops!). The second are “boutique” farmers producing high-end wine, cheeses, and likewise from the luxurious lifestyle of European immigrants who are fed up with inventing rockets and tanks and have returned to mother nature.

Livestock grazing benefits open areas in nature by reducing the danger of fires breaking out and rapidly spreading through dense underbrush. In nibbling away at shrubbery, goats reduce the quantity of flammable materials, as well as the density of vegetation

As for us, our relationship with the land is forbidden and under constant threat. The mountain went from being a part of nature that embraced the village to a fenced-in “nature reserve” suffocating its people. The plain went from being a pastureland to one defined as a commercial agricultural area, cut off from the Palestinian communities living around it. Nature went from being a living, breathing expanse to a mere museum. Israeli policies have depended on transferring the mountains and forests to a “nature protection company,” and declared most natural areas in which we lived to be “nature reserves.”

Many more laws like the Black Goats Law were imposed, strangling the ability of animals to graze, and gradually transforming lands into “sanctuaries” solely for tourism and entertainment, places to visit, stroll, and enjoy the sights during the weekend. These laws destroyed the villages’ relationship to the mountains and the valleys. Our childhood love for picking za’tar and gathering it in pillow covers became a transgression to be prosecuted to the fullest extent of the law, and the gathering of wildflowers between two lovers became an unpardonable crime.

This piece was originally published in Arabic in 2014. At the time, the author was being detained by Israeli authorities upon returning from a trip to Lebanon.

Al-Quds* has been at the receiving end of the most intense and fastest colonial encroachment ever seen in Palestine, its people left to their own devices, stripped of any support,...

The Israeli human rights organisation, B’Tselem, has recently issued a statement in which it says that “the territories under Israeli control are organised under a single principle: advancing and cementing...