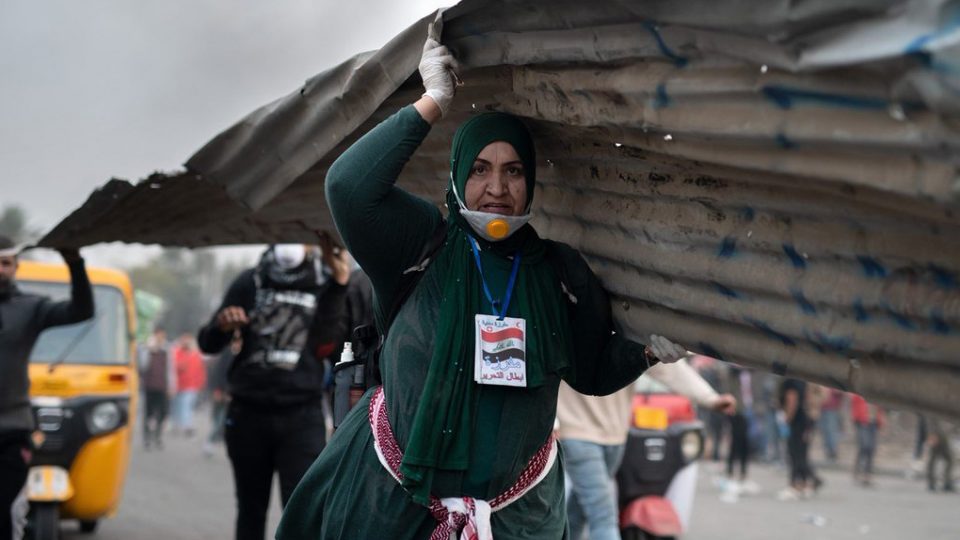 Despair-inducing tactics and humiliation efforts remained key to subjugation strategies; the uprising movements responded by upholding “dignity”, raising it on a par with the bread and liberty demanded in 2011 as in 2019. Such banners embodied the horizon uprisings sought, as opposed to the impasse the regimes entrenched, and attempts to acclimatise people to a compound of miseries.

2019: the Arab region welcomes back revolt and protest. The homecoming occurs a number of years down the road from 2011, i.e. the big bang that uprooted rulers who had fancied immortality with conviction, even planned their sons’ inheritance thereof. 2019 unfolds in four countries – Sudan, Iraq, Algeria, and Lebanon – despite an unleashed oppression, just as present and vigorous today as it was following the vast 2011 movement. In sheer panic, the 2011 ruling powers – themselves or their equivalent substitutes – clasped onto power all the way to the insane desire of eradicating any insubordinate attitudes from people’s hearts and societies. In Egypt, for instance, unquenchable retaliation ensued; in Syria, hundreds of thousands were killed, half the population exiled, while cities were destroyed and the country rendered common property into which external forces dipped… with various ruling regimes invoking such immense devastation to frighten their people and tame them away from similar endeavours. To no avail!

2019 then, with a Covid-19 pandemic that breaks out a mere few months from the new uprisings, helping to quell their momentum. In the meantime, however, the Sudanese regime is forced to sacrifice its own head; as was the regime in Algeria; while the Iraqi regime appeared to be incapable of controlling and ruling; whereas the Lebanese regime retreated into a loser’s silence, following a unanimous condemnation thereof. The 2011 and 2019 uprisings, however, are no mere exception in a people’s course; other rebellious instances preceded them the same way they comprise of them, be they major or minor.

The 2011 and 2019 uprisings were not limited to a fight against hunger; hunger was not even their main premise. Impoverishment had indeed reached unprecedented limits, unravelling a systematic predatory looting of the peoples’ resources that went beyond mere theft, all accompanied by staggering incompetence. Oppression had indeed affected all classes, and was indeed embodied, barring outright killing, by arbitrary arrest sprees; dismantling what was left of any existent, official or civil, intermediary institutions; and an encroaching executive power with its military and security cohorts, among others. Despair-inducing tactics and humiliation efforts, however, remained key to subjugation strategies; the uprising movements responded by upholding “dignity”, raising it on a par with the bread and liberty demanded in 2011 as in 2019. Such banners embodied the horizon uprisings sought, as opposed to the impasse the regimes entrenched, and attempts to acclimatise people to a compound of miseries.

The 2019 movements built on that: people of Iraq called for a “homeland” in their uprising, while the hirak in Algeria called for civil authority, rising against an extended military rule, whereas the banners raised in both Sudanese and Lebanese movements were just as comprehensive.

However, despite all their potential and brilliant features, an actual dilemma arose: how could one bring about change?

The stalemate in a process called “democracy” thus took root, a process limited to holding general elections every few years, often tainted by fraud and all kinds of forgery. It has reached a stalemate even in reflecting the different streams flowing through society; severed from what democracy actually represents – a developed public opinion capable of expressing itself through various frameworks and arrangements, and a free media. In any case, however, regimes are engineered to never assume such level of “democracy” within their structures.

In parallel, the stalemate social movements reached became tangible as well – regardless of how extensive and persevering they were, regardless of having specific demands sometimes – all impotent aspirations. In a best-case scenario, when oppression or containment fails, authorities, in rare cases, and if truly forced to – go around the main demands and take limited and distorted measures.

A conundrum thus emerges concerning change, whereby no tools are available to resolve or bypass this conundrum. In Iraq, for instance, the sit-ins all across the country’s regions and cities endured in public squares, the protestors and demonstrators endured the sniper bullets, gunshots, and deadly smoke grenades, where more than 700 were killed and 25 thousand injured, dozens assassinated, kidnapped, or lost in special operations. The one achievement consisted of unravelling a regime’s incapacity to rule. The raised banners contained but demands that would never be achieved, even administrative or regular demands like mitigating youth unemployment and providing electricity, unless the regime overthrew itself. The defect was deemed total and structural; faced with “authority” in its bare and invasive sense, and an absent “the State” in its alleged modernistic definition.

The ongoing uprisings also highlighted the transformations imprinted on their communities: women’s strong presence in public spheres; playing active roles; disentangling themselves from the authority of “sanctities” and the manner in which the latter are employed; unwavering condemnation of such employment; obstructing it as such; and bridging the generational gap… “Another logic” seemed to emerge from these uprisings, divorced from the established social structure and predominant ruling regimes. As such, the case of Iraq, Algeria, and Lebanon are “dissonant,” while the Sudanese uprising reached a practical formula and arrangement embodied in a “transitional period;” sharing power is carried out with extreme difficulty, and amidst disagreements and clashes between the military wing on the one hand – which had turned against al-Bashir, heavily armed with its devices, omnipotence, and connections with regional and international powers, willing to compromise everything in order to maintain its own power and enormous gains – and the representatives of the popular uprising on the other, namely, the “Forces of Freedom and Change.”

Wherein lies the solution, then? Homi K. Bhabha (1) has called for passage from a fatalistic anticipation of deliverance towards an extended cumulative process. Whereby the locations of culture become key to this process. Perhaps that alone, however, is no longer possible amidst the increasingly abject state of societies and predatory domineering groups, indifferent to their communities. Indeed, the rift is deep and all-encompassing. The political practice – the conversation taking place between authorities and society – has been rendered into its simplest forms of expression: it manifests as uncouth oppression or straight-out scorn and disregard; either way, it manifests in permanent disastrous socio-economic and political choices. As such, available instruments like protests, sit-ins, or strikes, regardless of their momentum, and even if used to try and consolidate programmes and reach agreements and so on… – instruments long used for protesting all through the modern era – are no longer effective in transforming the plans laid out by the ruling regimes (in Arab countries, certainly, but also all over the world!), or in obliging the latter to negotiate or compromise. In the meantime, armed uprisings seem powerless too, risking an aftermath of largescale ruin –authorities do not hesitate, if there need be, in unleashing their entire quota of oppressive devices against their own societies. Once more: what can be done?

The seven texts Assafir Al Arabi publishes here tackle such problematics, examining the realities of the 2019 uprisings in Iraq, Sudan, Algeria, and Lebanon. They try and analyse their implications as well as their potential tangible features and results attained thus far. Collected in a “Daftar” (a notebook), The 2019 Major Uprisings: Severed Outcomes, to be followed by other texts recounting the creative surge these uprisings unravelled in many a domain – which the authorities have failed to block, just as they had with its conception. Those are incredibly lively souls, an undeniable force of life!

1- An Indian-English scholar, one of the most prominent figures who theorised postcolonialism. The Location of Culture, 1994, is one of his most significant works.

Sudan: Anger is Finally out of the Bottle – Now What?

The Hirak in Lockdown Algeria