Nezar was a twenty-three year-old man with a Schizoid personality disorder. He became a regular visitor to my clinic after he entered my office once by mistake. I started to follow his case since that incident, and we developed a strong treatment relationship when I got to know him. He was in a state of severe autism but by coincidence he saw one of Salim Barakat’s novels on my desk on
2013-11-06

Nezar was a twenty-three year-old man with a Schizoid personality disorder. He became a regular visitor to my clinic after he entered my office once by mistake. I started to follow his case since that incident, and we developed a strong treatment relationship when I got to know him. He was in a state of severe autism but by coincidence he saw one of Salim Barakat’s novels on my desk on that day, and it took him out of his schizophrenic autism and drew him closer to me.

“The pain of the tamed, undescribed, and puzzling in the voice of Sarmak,” a schizophrenic innovation by itself, was the title of the novel.  Nezar read the title, flipped a few pages before he put down the book on the desk and said in an exhausted voice: “It is a difficult read.” On that day I asked him to sit down and we engaged in a long talk, in which I took the stage mostly, not because I wanted to but because Nezar does not usually talk much. Session by session he started to talk more. He started to look at me and stare in my face. I saw him once every other week; he used to come to the appointment accompanied by his mother. Gradually, he returned to reading, just like he used to do prior to his illness.
He started to bring a summary of a short story or a novel to discuss it together, until he came one day and said to me: “I defeated the ferocious solitude.” His mother told me later that he started to sit with the family at home and watch television with them, talk more than before, and go out for some leisure time. He asked to go out more than once, but his mother refused because she believed that he was sick and something bad would happen to him if he went out alone.

In our last session, Nezar was wearing big black glasses; he took them off and put them on the desk as soon as he shook hands with me and sat down. I deliberately expressed my admiration of his glasses and said they looked nice on him. He smiled and told me that he was wearing them to stop the annoying sounds that he was hearing continuously. His mother jumped in and interrupted us fiercely to say that he was also wearing them at night, a silly thing that only insane people do. Nezar kept quiet, gave me a desperate look and lowered his head. I gently told his mother that he was wearing the glasses for a different purpose, different from the usual reason for wearing glasses, but they remain to be a shield that helped him reduce bad influences.
“You understood me, doctor,” the young man said to me with a semi-smile before he retired to his silence.

His mother said with a sudden rage that she had accepted the fact that her son was sick, took medicine, and visited Al-Razi hospital despite all of what people could say about it, but she would never accept encouraging him to disobey her orders and do senseless things. She pulled him by his hand and left the office. The glasses remained on the desk like a thrown weapon.
I had an appointment with Nezar this morning, but he did not show up.
“That is it, enough of this work at Al-Razi. This time I will leave for good.” How many times have I said that? And each time I back away. My instinct tells me that life outside the hospital could be worse.
I felt I had to cry, since I could not do anything else. I remember the last time I cried was when my mother died, and I felt exactly the same this morning; unable to do anything for her. Crying is the condolence of the eye that can see its inability to do anything. When tears drop freely and softly, they save us from complete desperation, because even when our hands are tied, muffled, humiliated, and insulted we still have this unique ability to release water drops from our eyes. Therefore, no force on earth can prevent incontinent tears; the water of the oppressed man.

I was sitting alone on a wooden chair under an orange tree in one of Al-Razi gardens. It was a Saturday and I had no patients to see. I felt that I was about to cry while finishing the last pages of Steinbeck’s novella Of Mice and Men.  There is nothing more saddening than seeing the dreams of men shattered and broken by mighty destinies. I saw enough cruelty in Al-Razi to make me cry for the rest of my life, but I did not because I was prepared by experience and personal formation to put up with all of this. I saw young women taken to marriages just like sheep are taken to a slaughterhouse, and I did not cry. I saw teenagers fail and commit suicide, fed up with their parents’ hopes and expectations. I saw children raped by an uncle or a father, and I did not cry. I saw seniors go senile and lose their dignity. I saw sons take their old parents to psychological exams and then take them to courts to prove they are incompetent in order to inherit, and I did not cry. I saw autistic children, schizophrenics, depressed people, HIV-positives, hopeless cancer patients and cast-off homeless people struggling with their conditions, and I did not cry. I saw young people burn their bodies, cut their veins, throw themselves from windows and balconies and in front of cars, drink rat poison, and drain their lives with drugs, and I did not cry. I saw the mentally retarded, killers, bereaved mothers, widows and orphans, betrayed men, job-deserters, army fugitives, home runaways, lepers, prostitutes, handicapped, deaf dumb and blind, single mothers, infants deserted on birth tables and in front of trash cans, and I did not cry. I saw what is beyond my endurance limit. But this morning a novel made me cry.

How simple the dreams of people seem sometimes, and how bitter it tastes when they fail. What made me cry on that morning was the feeling that I belong to these dreams of men, wherever they are, and their sufferings. It was also the discovery of the wonderful breakage that we all belong to and the greatness of American literature; from the “Old Man” of Hemingway to the “Road” of Kerouac, reaching to the “Men” of Steinbeck, the literature of breakage and fragility remains its extraordinary ground.
Al-Razi Psychiatric Hospital is a mental refuge in the city of Menwiya in the western part of the Tunisian capital. The name Al-Razi goes back to the beginning of the period of independence in the sixties, and it refers to the well-known Arab doctor Abu Bakr Al-Razi. This hospital was built on a country estate in the early thirties of the past century. The management at that time was under the French mandate. It was designed to be far from urban areas, made up of independent and distant sections. The architecture and management of the hospital reflected a distinctive colonial character that discriminates between Muslim, Christian, and Jewish patients. After independence, the way of managing the hospital changed along with the way of treating and dealing with patients. Its sections were given names like Ibn Rushd, Al-Farabi, Pavlov, and Freud. The famous French thinker and psychiatrist Frantz Fanon entered the hospital in 1957 and spent two years there after the French colonial authorities forced him to leave Algeria.
The hospital witnessed several changes and reforms after independence. It has 658 beds. The hospital received 146,000 people in 2012 for checkup, admittance, or to take medicine. The number of visitors increased significantly after the revolution of 14 January 2011. The image of the hospital in the minds of the public remains negative. Mentioning it stirs fear and pessimism and it could reach the point of stigma that will not be forgotten easily.

It is called Al-Razi hospital in Tunisia, Al-Shammaeya in Iraq, and Al-Asfuriya in Lebanon. (In the last two, the names refer to the areas where the hospitals exist.) It also exists in all other countries, whether publicly or secretly. There are two ways to deal with insanity. One is based on fear and adopts concepts of evil, curse and witchcraft or, in a more modern way, adopts the concept of defect. The patients of these illnesses are necessarily the “other,” and are categorized as a group outside the social form. In previous times, these cases were treated with torture and burning; now they are treated with oppression and isolation.

The other method sees these human phenomena as expressions of the huge diversity of the human composition itself and considers them as “adaptation” with the current social ties with all its forms and complexities. Insanity, and the way of dealing with it, are considered as revealing fields of social structures of economy, politics and culture, and were the interest point of philosophy, sociology, and religion. The diaries written by a young psychologist who works at Al-Razi hospital show images of actual social life. They show the images that belong to everyone; images of the relationships, the mentalities that emerge from them, and what these mentalities reproduce. They are of interest to us from this particular angle.

The water problem cannot be addressed from a purely technical point of view and the figures and percentages should not be dealt as absolute scientific facts. The management of water...

Covid-19 in Tunisia: Putting a drained public healthcare system to a rough test

The success of flattening a first wave with minimum possible harm - politics soon reversed! After what looked like a hudna, disputes, conflicts, and manoeuvres resurfaced. Their initial aftermath was... 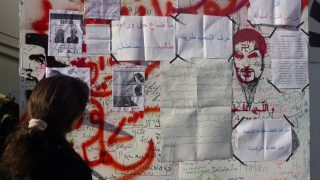 What comes after Mahmoud Darwish? Rap! Yes! What is so weird about that? This is by no means an attempt to theorize about the end of poetry. It is just...