God Almighty is exalted on his throne up in heaven, and no believer dares complain or wonder about his absence or presence. On the contrary, his non-physical nature is what consecrates his existence, since he controls, rules and dominates everything. Relations with the king One must refer back to this image of God, and to
2013-08-14

God Almighty is exalted on his throne up in heaven, and no believer dares complain or wonder about his absence or presence. On the contrary, his non-physical nature is what consecrates his existence, since he controls, rules and dominates everything.

Relations with the king

One must refer back to this image of God, and to the intimacy God maintains with faithful believers, to raise the right question about the monarchy in Morocco and relations with the king.
It is no secret that the monarchy in Morocco stems from divine right. The king is not like leaders chosen through the ballot boxes or who come about as the result of a new military battle. The king in Morocco enjoys divine standing; he lives in a different setting, surrounded by mystery. This pervades the entire logic of his relationship with his subjects. Ironically, both distance and proximity are key to this relationship.

The former king: strict and superior

Under the rule of the late King Hassan II, observed protocol took care to preserve this image of the superiority of the untouchable king, towering above all trivial discussions, his stern face not betraying any sign of weakness. From his palaces, he ruled over the country through fixed stations and conducted the country’s affairs through a network of intermediaries, with whom his relationship was similar to the one between God the Father and his apostles. When addressing his subjects, he always came out as vigorous and powerful, whether through television appearances or during his tours across the regions. These tours fell within the scope of the “Harka” tradition [aimed at maintaining order], except that the means of transportation had been modernized and rapid means of communication no longer allowed for the promotion of separatist discourses which were formerly fed by rumors, given the authority’s unapproachable standing.
The king was omnipresent — either on the back of his horse, in his vehicle, on the radio, or on television. He was here, and he carefully laid down the rules of his leadership. His physical presence was vital, at least with respect to image, since he was filling a scene which had not yet been entirely cleansed of the remnants of insurgency. Moreover, it is worth mentioning that political matters were subject to impenetrable silence. Any unruly criticism was necessarily transmitted through specific channels that could be silenced when the time was right. The political arena was unstable, but each party had its own place and the king was the leader who wandered neatly across the scene.

The legitimacy of efficiency

Since then, things have seriously changed. The monarchy no longer needs to wave this image of the physically omnipresent king. The legend of the strong presence of the king, even within houses, may only be established if the proper distance — one that keeps him far from the crowds but at the same time brings him closer — is maintained.
The political field is organized differently. Opposition forces are not only silenced, but rather they see themselves exposed to continuous fragmentation. At the ideological level, the opposition is in a state of inertia and the rise of the Islamists gave it the last rites. The regime cleverly integrated all parties who enjoy some kind of stature. Currently it even seeks to resuscitate its drifting enemies, whose presence is beneficial to it in that they revive the puppet show, which best describes the petty political scene.
This is how the monarchy progressively completed, under the reign of Mohammed VI, the delegitimization of other parties. It disrupted their control mechanisms on the social and economic spheres by taking over the reins of power in every sense of the word. Moreover, in addition to its historical legitimacy, the monarchy enjoys what I call today a legitimacy of efficiency — in other words, domination over political practice. The king is the only one objectively capable of making strategic decisions, since he is the only one who has all the tools. The king is the pole at which other powers intersect, especially those dominating over the sectors of economic life and the ones enjoying the power to make decisions.
The king is the decision-maker; others are incapable of making decisions. The first hundred days of the government of change of Abdel Rahman el-Youssoufi demonstrated this incapacity. The new authoritarian structure revealed its features, resorting to the king's decision on matters having to do with the law (i.e. to manage where others fail). Since then, the political class has become subject to guardianship — its size reduced owing to its own weakness — and has referred to the king to remedy its own internal disputes.
Thus the king’s presence gained more strength than ever. His tours across the regions, his penchant for kindness and his attention to poor social groups brought him closer to the people within a context of presence and familiarity, which is completely contrary to the image of a tyrannical despot. Kindness prevailed over fear. The Moroccan king was never closer to his subjects, despite the distance! Based on the aforementioned, the complaints about the king’s absence no longer corresponded to the analysis of the Moroccan monarchy; rather, these complaints were the result of a lack of foresight.

An indispensable king who is close to the people

The poor decisions of the new government and its new key players create a new factor. The political class is not making any decisions, since it is composed of a poor elite class having no prospects of success, fragmented and left to face its fate. This class regards itself as an orphan since the king moved to Agadir Palace. Since the beginning of his reign, King Mohammed VI has kept his distance and showed modesty rather than arrogance in the way he exercises power. This observation may not be questioned. Nowadays, the king’s power allows him freedom of movement, since nothing can be carried out without his consent. Yet the pressure of developments, patterns in the work of the political class, and supplications have brought back protocol rituals that seemed doomed to oblivion during the first years of the rule of Mohammed VI.
One thing that may be noted in the current scene is the absence of the ruling political class — given its deficient status — which explains why it is always searching for a guardian mentor. The movement of the new leaders across the country aims specifically at consecrating their effective presence, but that is just an illusion. The puppet show cannot perform on its own; Pinocchio always needs his mentor to keep him standing on his feet and to lecture him when needed. 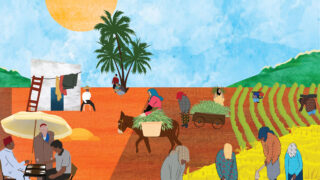 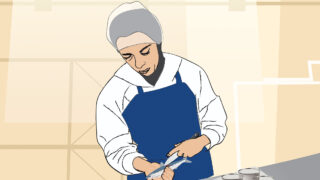 It’s a celebration. The neighborhood’s children, like other children in the village, stand by awaiting the “opening ceremony.” I put on my new clothes. On the left side of my...