Several attempts have been made to legalize the informal economy in Algeria through facilitating the integration of unregulated workers in the formal economy. However, success is yet to be achieved.
2019-06-05

Since the inception of the term “Informal Economy” in the 1970s by the anthropologist Keith Hart, followed by the International Labor Office (ILO) in its "Kenya Report", the expression has taken several meanings and been the subject of a series of theoretical analyzes and it would be tedious to return to them. This economy exists in both developed and developing countries.

In Algeria, there is a general consensus that “informal activity” includes all activities that are not declared to the social security system, which is a legal obligation. It is also questionable whether this criterion is sufficiently accurate for classifying its agents. In other countries where registration with the social security is not compulsory, this criterion must be reconsidered.

In any case, exploring this world is not easy. It can be accessed through the door of “employment”, or, in other words, through the relationship between the worker and the employer, in a reading centered on the individual. Whoever works without social security and whoever employs a person without any kind of insurance, whether with or without a contract, is in violation of the labor market regulations. In this case particularly, it is only the employer who is liable and subject to an administrative penalty by the labor inspectorate, while the employee is a victim. At first glance, this way of regulating the labor market seems symptomatic of a dysfunction of the economy as a whole.

According to statistical data published in 2017, there are more than 6.2 million people in Algeria who are not registered in social security, versus 4.7 million who benefit from social coverage. The percentage of non-affiliation is thus in the order of 57% of overall workers, who are therefore considered to be part of the informal sector. According to the official data, we can estimate the rate according to different indicators: age, sex, marital status, place of work, professional status, economic sector, etc. Hence, the informal world can be decrypted through individuals, families and economic sectors, from a social-analytical point of view. Similarly, it can be approached and understood from the regulatory and administrative perspectives.

The following questions arise: Why does this economy exist? Why is it not regulated? The existence of this economy seems to be essential to the functioning of the general economy and the labor market. Its coexistence with the "normal" economy is thus real and formal economy even "tolerates” the informal one, as it implicitly acknowledges its role as a “safety valve” to avoid social conflicts and ensure social stability in the country. As a whole, this economy has led to a substantial reduction in the unemployment rates, from almost 30 percent in 2000 to 12 percent in 2017.

However, the Algerian authorities constantly claim that the informal economy is detrimental to the social security and tax revenues and that it undermines the economic health of the state as a whole. There are various evaluations of its actual contribution to the creation of wealth; it is estimated to be around 40% of GDP (Gross Domestic Product). However, there is no direct survey on the informal economy to date (1), even if, of course, there are several partial or microeconomic studies, reflections, reports and many speeches that use data from the employment survey of the National Office of Statistics of Algeria.

The vital function of the informal economy is no longer disputed: it seems to guarantee social peace and contributes to the formation of national wealth.

So, what can be done? Experts in the International Labor Office, which has long produced analysis on this economy worldwide, recommend some solutions, knowing that the capitalist system needs this economy for its viability and growth.

The main recommendation is integration into the modern economy through organizing the transition from the informal economy to the regulated one, particularly in developing countries. Some procedures are recommended to organize this transition with the least friction possible, since the workforce would be very useful for the production and services of the liberal economic system.

As a first step, economic activities must be classified according to the legal norms, which are, in turn, usually determined by the system of social values. Legally recognized activities may be subject to legal treatment, with flexible procedures. For example, a gradual “localized regularization” system may be endorsed without retroactive effects. In other words, informal activities can be legalized without any penalty for having previously been exercised without social insurance. The same procedure is recommended to attract money from the informal sectors into the banks.

The second step would be the exclusion of "illegal activities" from the informal economy. These activities do not conform to the prevailing social norms and are condemned according to the relevant international conventions. This includes all types of smuggling, trafficking in counterfeit products, services prohibited by national legislation, smuggling of migrants, human trafficking, etc. Measures must therefore be taken to combat the actors involved in such activities.

The legality of economic activities varies according to the legislation of the countries. Some activities may be lawful in one country and classified as illegal in others, such as the sex industry or the production and consumption of cannabis. The aforementioned ILO recommendation has the merit of distinguishing between a "healthy" informal economy and an underground economy activated by organized agents of transnational networks according to the standards of lawfulness, which must be translated into national legislation.

Governmental Measures of the Algerian State

The measures taken so far by the Algerian state to combat the informal economy can be summarized by targeted actions that show an intent to correct the dysfunctional labor market. Operations are conducted periodically and sporadically against "parallel markets" and target unlicensed street sellers who sell all types of products. These "sweeping” raids result in the confiscation of goods traded at prices so low that the formal sector simply cannot compete. Some procedures also targeted informal savings, by allowing those with financial liquidity to deposit their money in banks, without necessarily declaring the source of their funds. Other measures involve promoting small businesses as part of the schemes to create economic activities and job opportunities, with a subsidy from the state, either through direct assistance or with an interest-free bank loan, repayable according to a time schedule.

The case of the creation of businesses through microcredit is interesting for more than one reason. Activities are created at home, with the help of the state which facilitates the purchasing of raw materials. These activities are supposed to help families with irregular income or no income. However, home-based activities are classified as part of the informal economy! Similarly, the social and solidarity economy is a non-existent segment of the economy in Algeria. Numerous associations and NGOs also hire people to work on a regular basis but without any registration in social security. These few measures taken by the state indicate that there is a desire to integrate the informal economy into the regulated sector. This integration, though targeted, makes no distinction between lawful and unlawful activities. A social legitimation of informal employment is thus in place.

The dynamics of the informal sector stem from the inadequacy between supply and demand (job creation is scarce while the demand for additional employment is strong) and the "costs" of employment to be borne by the employers (taxes and charges which are considered too high) in the modern sector. Studying the informal economy from this perspective thus calls for a profound revision of the "right to work", which is supposed to be guaranteed by the State. In the recent years, a draft for a new Labor Code has been proposed, but it remains under discussion until now. This preliminary draft is intended to provide the labor market with a legal framework that enables the State to play its adjusting regulatory role in economic activity. The draft leans in the direction of an illegalization of all informal activities!

These observations on the dynamics and the essence of the informal economy cannot be made outside the logic of the capitalist world system which continues its growth, especially in the dominant economies of the triad: Europe, North America and Asia. This system leaves the subjugated economies at the “peripheries”, manipulated and used to provide a cheap labor or the raw materials needed for production.

However, this division between a dominant economy and a dominated economy is not systematic. The international capitalist system also invades the dominated economies, through branches of multinational corporations that transgress economic rules everywhere, with the support of a class of contractors who survive on oil rent, just as in Algeria, the African country seeking to emerge.

The effects of globalization on the economy led to a restructuring of the Algerian society. This social structuring has given rise to a class of “nouveaux riches” who often do not have the culture of the "bourgeoisie". However, the social agents of the informal sector are not as clear. For a moment, it was believed that the informal sector was mostly driven by the middle class, who, being poorly paid, engaged in complementary activities in the informal economy to make ends meet. As for the working class, they are for the most part underpaid workers in the nascent private sector while another part works at home or in inappropriate places, for the benefit of the contractors who own the necessary capital and legal institutions.

This social structuring is not without social impact. Social conflicts are evident, often accompanied by acts of direct and indirect violence. The social ladder operates in a chaotic manner, changing with ups-and-downs at any given moment, always according to the power equilibriums between those who are close to the “decision centers” and those who refuse allegiance to the ones in power.

__________
(*) It was not until 2017 that a standard study was launched by CREAD (Center for Research in Applied Economics for Development), in partnership with the Ministry of Commerce in Algeria. 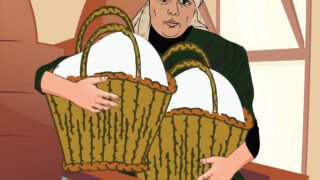