The unprecedented process of popular unity since “October uprising”, show that Iraqi women and men are healing from decades of war and social fragmentation.
2020-03-09 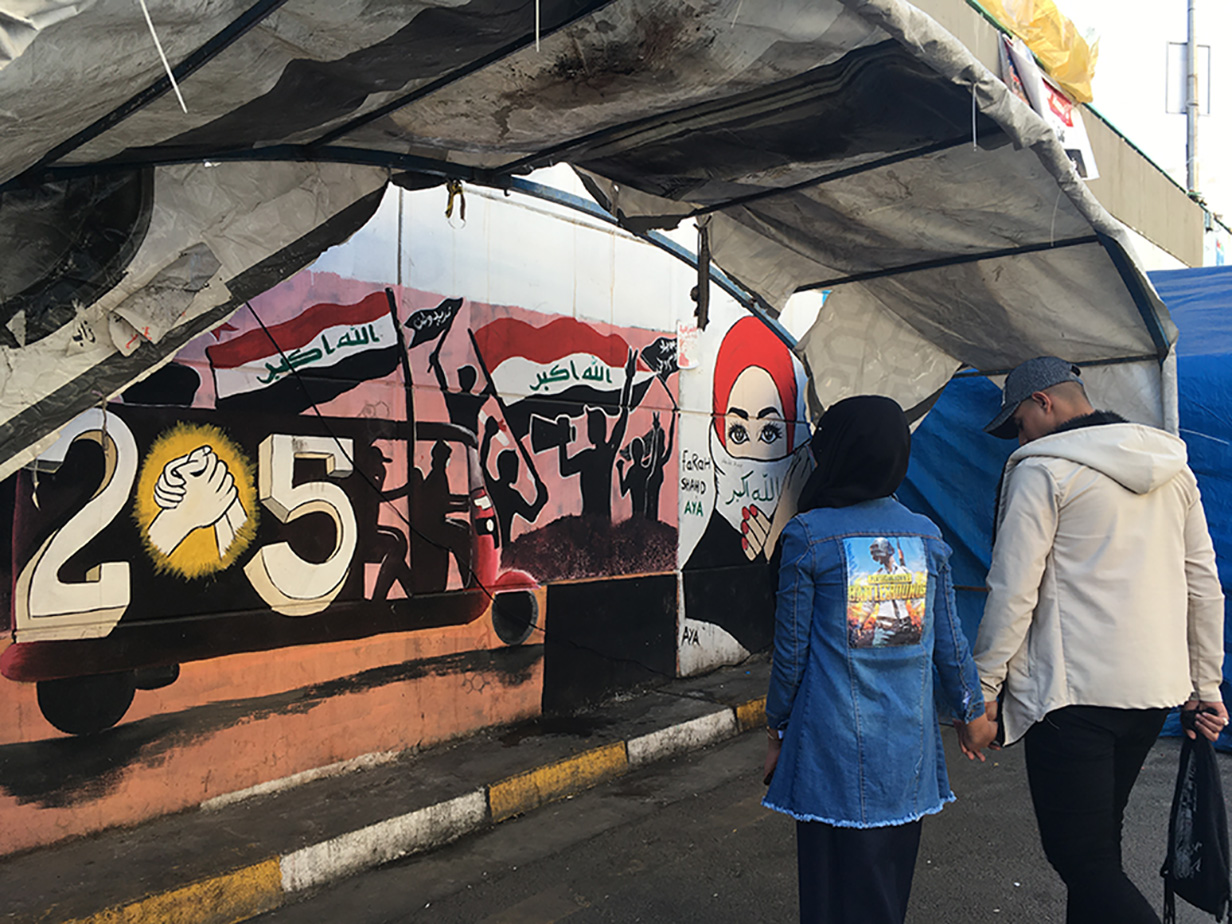 Since October 2019, Iraq is experiencing a turning point in its history with popular mobilizations demanding radical change. The Iraqi revolution is a societal uprising involving a wide spectrum of society including the dispossessed, the marginalized, the ones deprived of resources and power.

Women’s massive participation from young female students to older women has turned this uprising to a people’s revolution. While remarkable, this participation is not surprising, it only makes visible deep societal realities and transformations that have found their space of expression in the Iraqi streets and squares of protest.

Since at least the 1990s, wars and harsh economic sanctions impacted heavily on Iraqi women who had to carry the society’s livelihood and survival on their shoulders, as head of their households, workers and caretakers. Decades of wars and economic hardship also turned public spaces into militarized and male dominated spaces.

Tahrir Square in Baghdad, Al-Habubi Square in Nasriya and squares of protests all over the country are spaces where those who are looked down upon, dominated and discriminated against can exist and thrive. Women are taking back public space in marching, demonstrating, occupying, organizing and making them-selves visible and loud whether in the frontline facing Iraqi security forces’ brutality, or in their artwork decorating the squares of protests, and taking care of the wounded protesters, cooking and cleaning.

In these spaces a new social fabric is woven through collective organizing, the Iraqi society meet, negotiate and build new societal bonds and norms: where the uneducated poor is equal with the educated middle class, where men and women, young and old meet, share a common space and build a common movement. The protesters are, in effect, establishing new ‘state forms’ by providing free health and education services, street cleaning and re-paintings, as well as the restoration of public monument and beautification of public spaces through original art and design.

"Women of the October Revolution are Revolutionaries not Whores"

While the scale and level of this participation is remarkable, it is not surprising. One of the first demonstration organized in post-2003 Iraq was a women’s right protest against the Shi‘a political elite’s attempt to question the basis of their legal rights, the Personal Status Code. Just a few months after the US invasion, the Shi‘a Islamist political elite, brought to power by the US administration and its allies, attempted to put in place a sectarian-based code instead of the one in place gathering Sunni and Shi‘a jurisprudence. While this attempt was blocked by feminists’ mobilizations, Shi‘a Islamist parties are constantly renewing their attempt to adopt a sectarian and conservative Personal Status Code, their last attempt being the Ja‘fari Law proposition.

The post-2003 system is ‘Sextarian’ as defined by the feminist scholar Maya Mikdashi in the sense that the muhasasa system is not only based on ethnic, religious and sectarian difference, but it is also based on sexual difference. Sectarianism is gendered, identity politics are being played on gender norms and relations, especially on women’s bodies. If conservative gender politics already started during the sanctions with the Ba’th regime’s Faith Campaign, the exacerbation of social, economic and political fragmentation since 2003 and the nature of the political elite that came to power created extreme forms of social control and conservatisms.

Patriarchal sectarian religious forces not only dominate the political sphere, but also the streets through their armed groups and militias. The sectarian war of 2006-2007 and the Islamic State invasion in 2014 represented extreme forms of a sectarian and gender violence. The sextarian system asserts its power through sectarian and gender division, visible through imposing strict dress codes for women, as well as for men, and limit both sectarian and gender mixing.

It is clear in the nature of the repression exercised by the Iraqi political establishment that is trying through their media channels and social media campaigns to undermine the revolution in portraying it as “immoral”. Revolutionaries are accused of being sexually corrupt and depraved and all kinds of rumors are spread around supposedly “illicit behavior” happening among the youth under the tents set in protests’ squares. The repression targets women, especially young women. Militia violence is used to prevent women’s participation in spreading fear and terror, kidnapping protesters such as Saba Mahdawi and Mari Mohammed or in killing them in the case of Sara Taleb and her husband ‘Adel in al Basra or Zahraa Ali in Baghdad.

Women are also being attacked on social media. The hashtag #بناتك_ياوطن “Your Young Women Oh Country) launched for the women’s protest of last February 13th was turned into#عاهراتك_ياوطن “Your Whores Oh Country”. On the wall of the tunnel leading to Tahrir Square, and on signs held by young women during the protests, the following sentence can be read "Women of the October Revolution are Revolutionaries not Whores".

A woman’s voice is a revolution

Since the beginning of the October revolution, over 700 unarmed protesters, mainly young men, were killed by live bullets or tear gas canisters used by the Iraqi security forces and their attendant militias, over 25000 wounded and hundreds kidnapped and disappeared. Lethal violence and intimidation reinforced protesters’ determination as honoring the martyrs of the revolution quickly became one of its main mantra. One of the early martyrs and important figure of the protests Safaa al-Sarai used to be ‘Son of Thanwa’ in reference to his mother Thanwa instead of referring to him as his father’s son. ‘Son of Thanwa’ is now a name commonly used to describe revolutionaries and many protesters’ surnames refer to their mother instead of their father’s names.

The uprising goes beyond narrow political demands, revolutionaries are not only questioning economic and political oppression exercised through corruption, nepotism and discrimination, they are also questioning the system’s social and societal norms imposing a normative and conservative way of life. Through the slogan ‘We want a homeland’ Iraqis demand social and economic justice, functioning state services and institutions such as health care and education, housing, employment and what is needed to live a good life. They also demand freedom, freedom not be killed for the religion or sect they belong to or refuse to identify with, freedom of being religious or not, freedom to dress as they please, and circulate across social and sectarian borders, freedom to be different.

Protesters are not only asking for change, they are enacting it and living it, proposing new codes of conduct and building an inclusive sense of coexistence. Women participating to the revolution are diverse: from the uneducated middle-aged mother in her black ‘abaya cooking for the protesters to the sophisticated middle-class student leading debates on the reform of the electoral law. Young women from conservative families and those who challenge dominant dress code. All share a common space, elaborate strategies and organize the weekly protests. They chant together “No, no, no, don’t say it’s shameful, a woman’s voice is a revolution” aware of the subversive nature of their very presence.

Under a few tents, feminist agendas are being discussed tackling specific women’s rights issues, while under most tents, women consider that the revolution is already changing Iraq and that achieving its goals will benefit women along with men. Feminist activists in formally organized groups while present on the protest squares also respected the unformal and open nature of the uprising that refuses any type of affiliation.

The diversity of women’s participation, whether they participate as individuals or as members of women’s rights groups, is visible in the international women’s day mobilization showing that the limited term ‘Iraqi woman’ used historically, often by male political agendas, whether secular or Islamist, is being replaced in action with the more inclusive ‘Iraqi women’. This unprecedented process of popular unity show that Iraqi women and men are healing from decades of war and social fragmentation.

*Zahra Ali is a sociologist and Assistant Professor of Sociology at Rutgers University, author of Women and Gender in Iraq: between Nation-building and Fragmentation (Cambridge University Press, 2018).

Iraq is one of the most environmentally vulnerable and fragile countries in the world, ranking 129th out of 181 countries. This places the country at the heart of the violent...

If there were one “craft” learned by the women of Iraq over the decades, it would be the craft of making a life amidst harshness and adversary. Once more, they...