The undeclared subsidiary role of the Algerian government in the European migration policy.
2020-01-04

share
From Folder: Migration: the world is flowing (1)
| ar fr 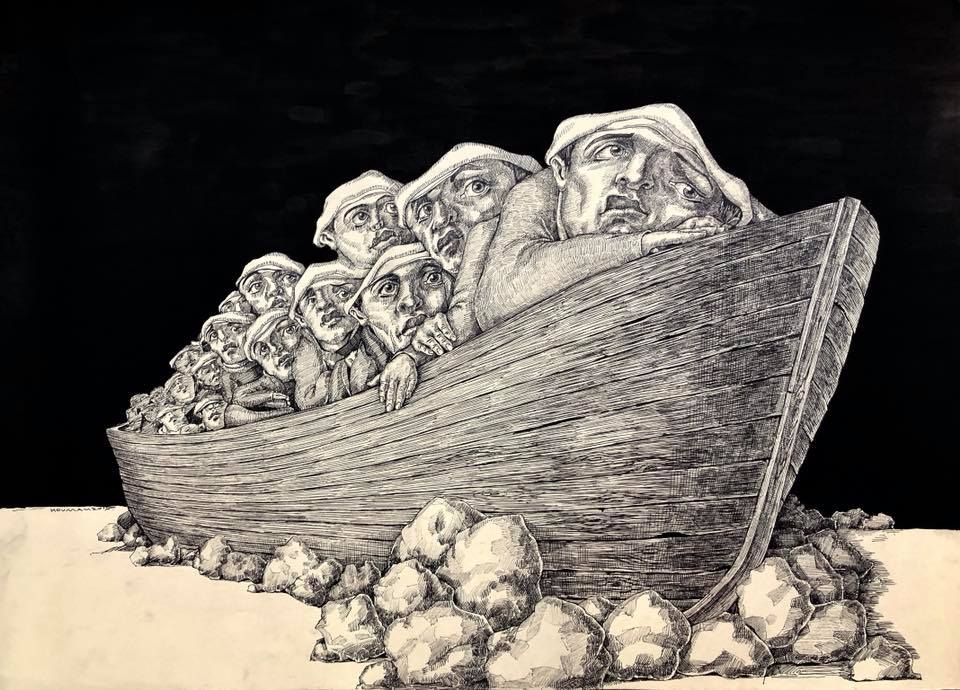 On March 14th 2018, the French Interior Minister Gérard Collomb met his Algerian counterpart Noureddine Bedoui in Algiers to discuss, specifically, issues of security and irregular migration. He then continued his journey towards Niger where a “conference on the coordination of the fight against smuggling of migrants and trafficking in persons” was organized with representatives of 9 African countries (Chad, Mali, Burkina Faso, Mauritania, Ivory Coast, Guinea, Senegal and Libya), 4 European countries (France, Germany, Italy and Spain), the European Union and the United Nations.

The regional instability, particularly after the fall of the Libyan regime in 2011, allowed Europe to impose its migration policy, within the framework of the war in Mali and the “fight against terrorism”. Algeria is involved in this affair.

While Niger is set as an example in terms of the containment of the refugees’ outflow to the Mediterranean Sea, Algeria appears to be critical towards the European migration policies and seems reluctant to integrate the programs or comply with the European Union’s agenda. Yet, it pursues devastating policies for migrants inside Algeria and also for the populations in the neighboring countries, particularly those in Mali and Niger.

Determined to prevent the arrival of refugees in Europe, EU officials develop migration policies which are increasingly onerous for the Southern Mediterranean and Sahel states. The agreement signed with Turkey in March 2016 to restrict migration to Europe and return the refugees who had arrived to Greece is set as an example intended to inspire other regions. The EU builds upon it to initiate new programs under the guise of “fighting the illicit smuggling of migrants and human trafficking”. In reality, security remains the top priority: controlling the flow of migrants, creating transit camps, militarizing the borders, setting up checkpoints, forcing repatriations, etc.

For the purpose of reinforcing these measures, especially at the Libyan borders, the European policies target both regions (Horn of Africa, Sahel, Maghreb) and countries. In the recent months, successive summits between European and African countries have been held: at the end of August 2017, the leaders of France, Germany, Italy, Spain, the EU on the one side and those of the Niger, Chad and Libya on the other agreed that “hotspots” (identification and registration centers aimed at distinguishing political refugees from economical exiles) would be installed in the African countries. However, to disguise their intention of selecting, the expression “hotspots” was replaced by “protective mission”. The European states have presented themselves as humanitarian “missionaries”, protecting against the smugglers, the trafficking and the slavery, barely concealing their cynical intents.

In November 2017, during the 5th African Union – European Union summit in Abidjan which focused on the youth, images of a slave market in Libya were released, diverting the attention from the subject of the meeting and orienting it towards the French president’s call for “a close cooperation to be established with an operational task force combining police agencies and intelligence services (…) to dismantle the networks and their financing” (1) . In the end, the main point was to set up forces of police and gendarmerie, to help in monitoring border control and create identity files.

In line with the two previous summits, the meeting of March 2018 in Niamey was devoted to the fight against networks of smugglers and traffickers. The summit planned to reinforce national legislations and consolidate police and legal cooperation between the countries. The development aid was increasingly being channeled towards migration management policies and the legal or police mechanisms put in place to contain them(2). The French Interior Minister Gérard Collomb, who was present at the summit, visited a center managed by the International Organization for Migration (IOM) in Agadez, a region at a crossroad between Algeria and Libya. Its local economy which had, for years, been dependent on the thousands of migrants who gathered there before continuing their journeys, collapsed when the state started to follow the European directives. On the migration routes, on the border posts, in the coach stations, and even inside the “ghettos” where they hide, the Nigerien security forces, with the help of the mission of EUCAP Sahel (European organism of police cooperation), hunt the refugees, the carriers, the lodgers, etc. Repression doesn’t prevent migration but makes it more expensive and multiplies its dangers; the number of deaths in the desert has increased significantly. This policy violates the principle of free movement inside the country and in the ECOWAS (The Economic Community of West African States) region, of which Niger is a part. Once arrested, the migrants are transferred to 5 “transit centers” managed by the IOM whose main purpose is to deter departures and encourage repatriations in exchange of a small financial assistance. However, this limited aid doesn’t deter prospective candidates from immigrating to Algeria where they either work or resort to begging (3).

In 2014, an agreement had been reached between Niger and Algeria allowing the latter to organize the expulsion of the Nigerien migrants who were involved in organized begging networks. In fact, since 2016, all the sub-Saharan migrants have been living in fear of expulsion. Around 100000 migrants used to reside in Algeria and a significant number among them had come from the neighboring countries fleeing wars, conflicts and the consequent deterioration of economic conditions. Some of those were in a temporary stay, trying to gather the sufficient amount of money to cross into Europe.

The Southern borders, traditionally open to the Tuareg populations, gradually closed with the many crises occurring across the Sahel region. Despite all, cyclic migrants were still tolerated in the last few years. Forceful deportations had not been implemented yet, but the migrants could face a two-month jail sentence for their “illegal entry” into Algerian territory. A majority of those in exile, particularly the Sub-Saharans, live in Algeria on abandoned construction sites, under bridges or in slums in the margins of urban areas, in extremely precarious conditions and outside any legal framework. They rarely get employed and, when they do, they are exploited or underpaid. Even though education and basic healthcare are still provided to them, the migrants do not dare to go to hospitals or send their children to schools anymore, after the government’s strict reinforcement of the law in 2017.

During the past three years, according the Minister of the Interior, 27 000 migrants were “repatriated at the request of their countries of origin” (4) . In reality, the exact number is not made public and, in practice, these are not organized repatriations but heavy-handed expulsions of people, including women and children, seized from the streets or from construction sites on the basis of “ethnic profiling”, regardless of their nationalities or status. Raids have increased in the past months, on all the territory. The arrested migrants, taken to the North of the country, are first rounded up in the summer camps of Zeralda - in the Western suburb of Algiers- before being transported in buses to prefabricated camps in the city of Tamanrasset where they spend a few days of confinement. They are finally taken by night to the other side of the border, into Niger or Mali (5) . Sometimes abandoned in the desert, in a hazardous environment, they often need to reach the nearest town by their own means. A rally was held on the 12th of March 2018 in front of the Algerian embassy in Bamako to condemn these illegal expulsions.

It seems that the time for “zero tolerance” has come. While the Algerian government pretends that it won’t allow the European Union to dictate its actions to reduce migration (6), the methods it resorts to actually produce the same results desired by the latter, under inhumane conditions. Without burdening themselves with the legal framework of protecting the rights of refugees or migrants and through impenetrable cunning procedures, the Algerian authorities repress to deter, criminalize and expel. Along these lines, the circular of September 2017 provides for the withdrawal of the right to work from private companies, taxis and minibuses transporting persons in an irregular situation (7). This reinforcement of governmental policies comes with shameful commentaries from politicians and racist campaigns on the social media which have prompted a series of physical attacks on migrants (8) . Under the pretext of the fight against trafficking networks, the victims themselves are the ones being prosecuted and expelled.

If the government really wants to stand out from the European policies, it should not resort to serious human rights violations. Accepting the externalization of the European borders and endorsing the role of the policeman is a short-sighted approach which overlooks the human, economic and cultural exchanges between populations that share common values and experiences of liberation struggles against colonialism. 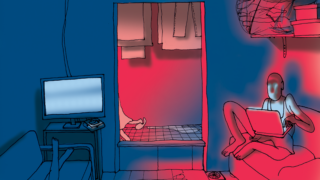 The Slums of Algeria: Invisibility and Hope

Everything has changed 57 years after Algeria’s independence, except for social exclusion, and its counterpart, spatial exclusion. To question slums is to question social inequality – that is, the “economy... 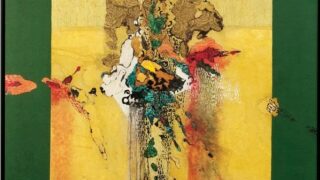 The Role of Petrol in the Fall of Bouteflika’s Regime

Abdelaziz Bouteflika has always used Algerian oil and the revenue it generates as a means of consolidating and perpetuating his power. He bought social peace and used oil revenues to... 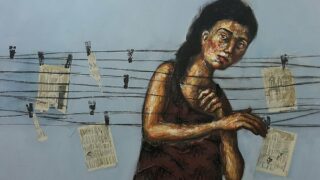 Who would have imagined in the year 1954 that an Algerian woman would become the “absolute” icon of this revolution; even “the icon of decolonization”. This event is all the...

“Jerusalem” is Temporal, “Al-Quds” is ever-present

In every corner of Al-Quds, Palestinians teach us a wonderful lesson in resistance despite all the insults, persecution and robbing they are subjected to. “Don’t be gloomy, my daughter; many...